Journey to the end of the world

Journey to the end of the world

So my pledge to blog more failed, as usual. Work has been really crazy lately, but it’s going to be a pretty slow week so I’m glad I finally got to sit and turn on my own laptop to blog.

Two weeks ago I went to Chile for work! I’ve never ever set foot in Latin America before so I was seriously quite nervous about it. Plus, I traveled alone so the thought of me going to a completely foreign land whose language I don’t speak AT ALL (well…I kinda know how to count from 1-10 in Spanish..) and whose culture I know nothing of really scared me.

I really thought it was going to be like Mexico with reigning drug lords everywhere and I had to be extra vigilant at all times. Also, watching Breaking Bad and any American TV show did not help at all..

Chile was completely different from what I had expected! And well, I was at the capital, Santiago, so things might be quite different elsewhere. 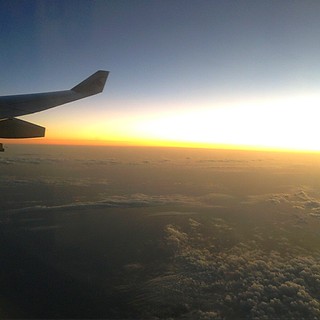 This was in the plane, duh hahah

Since I was flying alone, I tried SO hard to get upgraded to business but to no avail. Googled up tips and all but none of them worked also 🙁 Was extra friendly to everyone, wore a bit more professional-looking clothes, kept mentioning that “I’ll be more than happy to switch seats if the need arises” *wink wink*, nothing worked!! Gah so I had to endure the 32 hour flight in economy class 🙁

Yep, it was really 32 freaking hours. From here to Qatar, then to Brazil and finally to Chile. I was a zombie when I arrived T__T 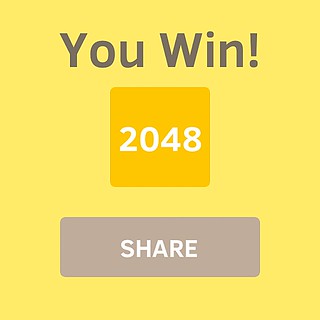 Good news is the flight was so long I had time to win 2048, finally! This is after I watched all the movies available like 3 times or something. So happy I finally won but couldn’t tell anyone so had to silently pump my fist in the air in triumph wtf. I’ve been trying for a month or so ok! 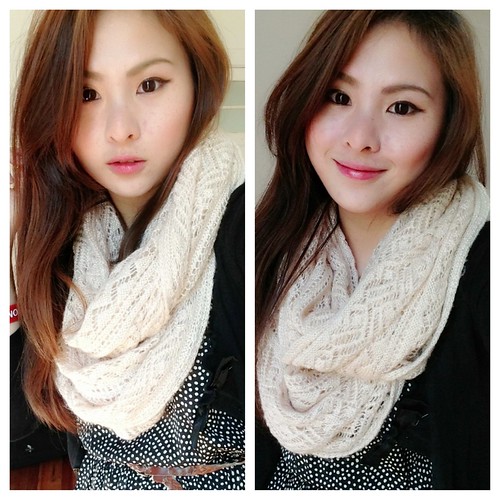 This is from the morning after I arrived! One of the best parts of my trip is the weather in Chile! It was averaging at 15-20 celcius when I was there, PERFECT scarf and tights weather!

When I walked around, I was so shocked to find that the city looks soooo European! The cobbled streets, the architecture, the buildings! It was a really pleasant surprise so I spent the whole first day just walking around allll day till I collapsed. 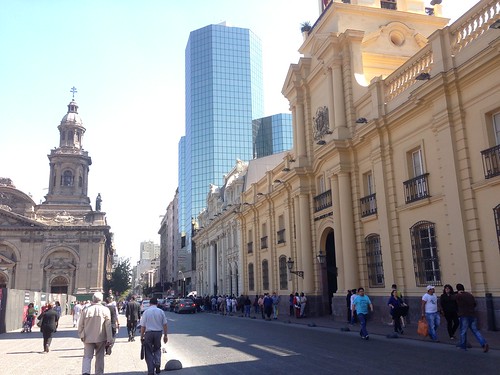 I think I also lost like 2kg from the first day cos I barely ate. Everything was in Spanish so it was pretty hard to order anything! So I ended up just eating empanada (like a giant curry puff) and starved.

I also hiked up two hills and walked for 8 hours or something! 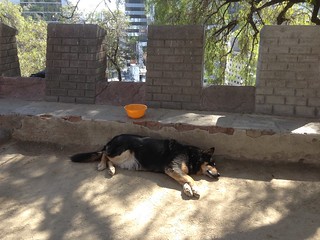 Eh damn weird, in Chile, I saw tons of dogs lying all over. On the streets, on the hill, in the subway etc. The dogs here are either super lazy, very chilled, or just plain drugged. And they’re all really big dogs too! This, and the fact that couples are always making out all the time everywhere! hahaha makes the Asian in me blush so much. Felt a compulsive need to stand around them to cover them from other people wtf

So I was huffing and panting after climbing halfway and was going to give up climbing to the top. Then I saw these two old ladies coming down and asked them if the view from the top was worth it. Without a hint of running out of breath, they said yes it’s lovely up there. I was so embarrassed so I quickly walked up and almost passed out climbing the stairs. And guess who I saw up the hill?

More old people! And a few families with babies and small kids! Sigh this Malaysian is so fail! That’s cause we don’t walk enough I think compared to them. Or it’s just me who’s super unfit…. *wails 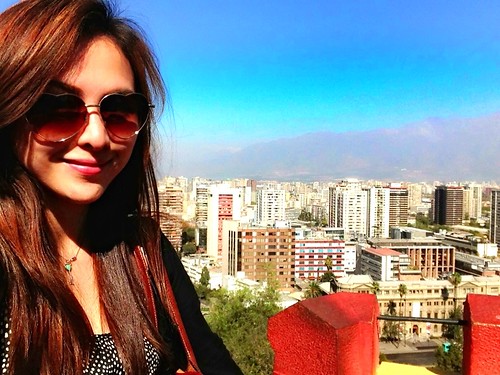 Well they were right, the view IS much better up here! 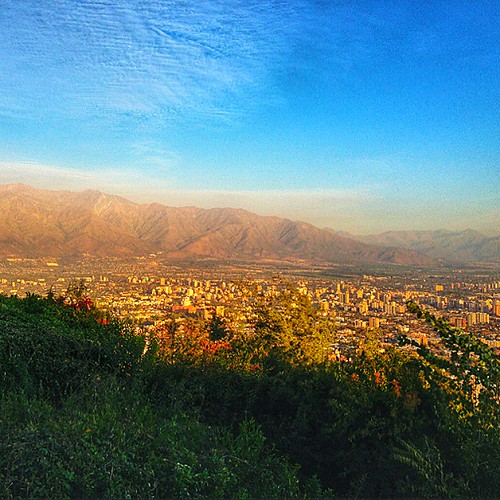 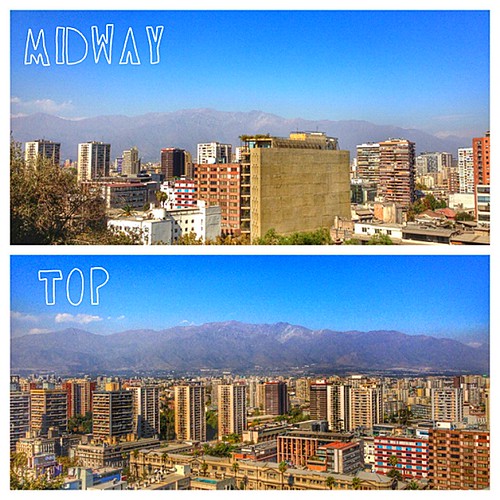 That’s the glorious Andes mountains at the back! Perfect backdrop. Give it a few weeks and it’ll be snowing so it’ll be much prettier!

Then I went to their Art Museum but was bored out of my mind cos it was super uninteresting. 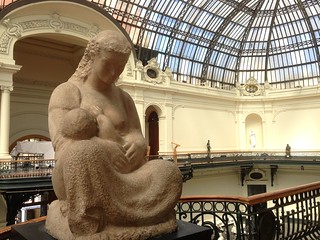 The next day, I went to this really quaint hillside coastal town called Valparaiso! I didn’t want to go in the beginning since it’s like 1.5 hours away, but really glad I went..which you can tell why from these pictures. 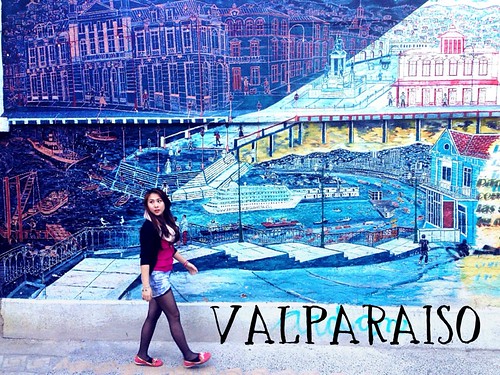 This entire town is filled with graffiti! Not all are as pretty as this, but a good 70% are! 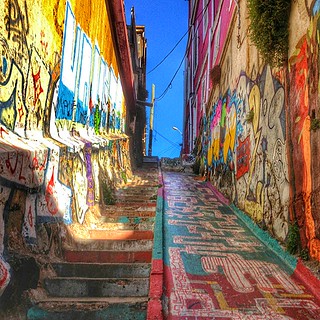 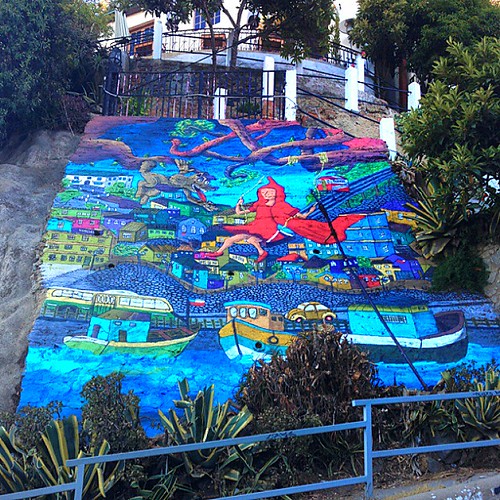 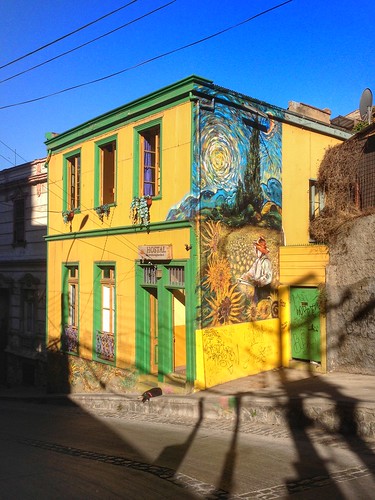 Picaso art on one of the houses. 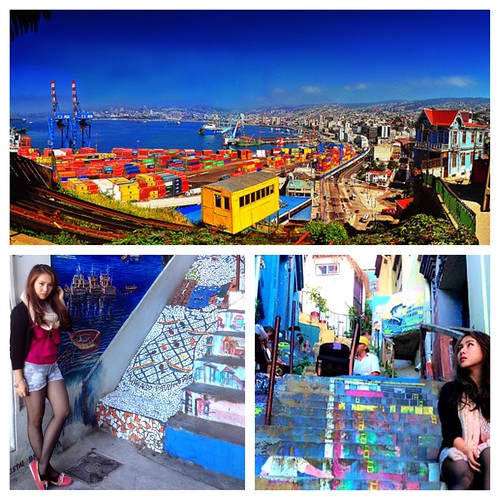 So artsy fartsy lah this whole place, wish I had more than a day here. Also got to hear locals sing Besame Mucho, love this place! 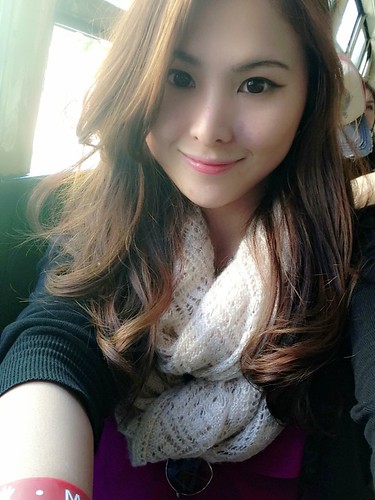 In one of those really old trams that go around the town. 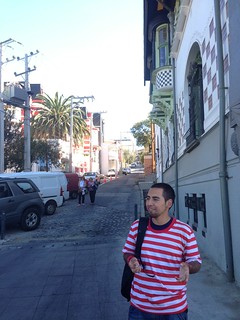 We joined this free tour (had to pay tips only) that had a guy dressed like Wally! Highly recommend this tour as we got to see the less touristy part of the town. 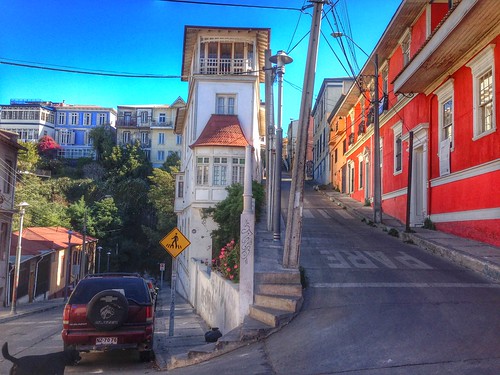 Yep this entire town is on the hills…..Can’t imagine if I live all the way at the top, though there are furniculars/trams that you can take up. 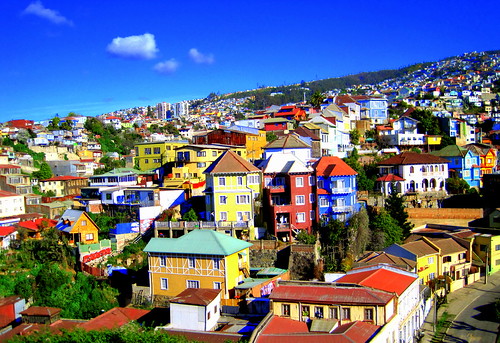 This picture is obviously not taken with my iphone. Karthik had this brilliant idea when I asked him if I should bring my bulky camera. He said if I wanted to bring it to take pictures of scenery, don’t bother cos the professionals would have taken whatever pictures I want to take and they would have done it better than I could. So I should just enjoy the moment and look for the pictures on google image.

No wiser words have ever been spoken. Truth is, I don’t take great pictures and am always too lazy to use my camera if I have my phone with me anyway.

But yeah, this is how pretty this town is! 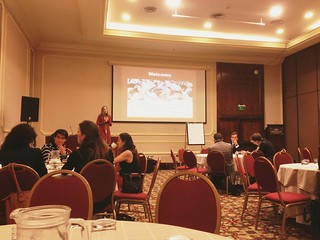 And then I spent the next 4 days in the conference! 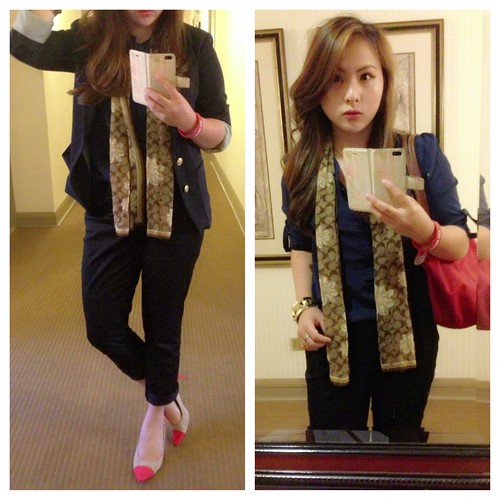 Didn’t take a lot of pictures during the conference (and I’ll spare you the details of it, plus it’s almost 12am and I’m really spent from work….) so I’ll skip to the last day where I had some time to walk around! 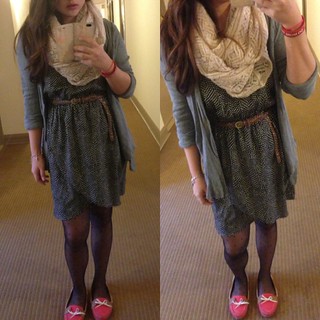 Also, back to wearing my favourite fall-weather outfits 😀 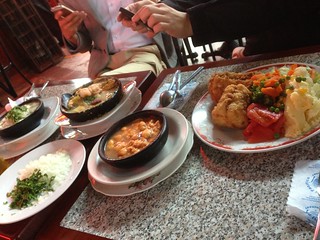 Ate seafood at Mercado Central, their fish market! Honestly wasn’t all that impressed. Food here has been quite a disappointing fare, sadly. 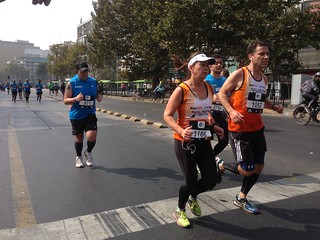 Ooh I was very lucky to have witnessed the annual marathon here! Pretty big deal and everyone was on the street encouraging the runners so I joined along. Shouted “vamos! vamos!” along with everyone without knowing what it means. Think it probably means Come on! or go on! or something. Surprising how fun it was to stand at the finishing line and watch the runners weep in joy! 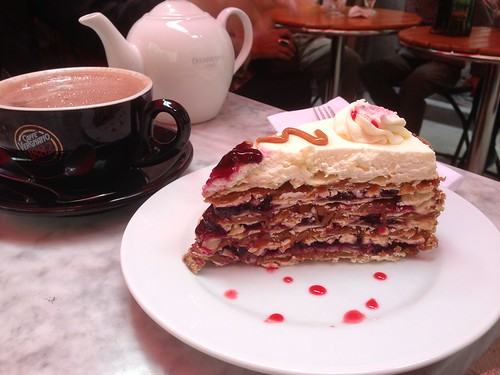 Also happened to find out that a college friend of mine, Zilin, lives in Chile! Met up with her for coffee and this really intense cake and spent quite a while reminiscing our time in college. Sigh, we are that old! Quite lucky to cos she speaks fluent Spanish so I finally could get around the city with ease! Also bought tons of wine and stuff from the grocery store with her help! 😀

Alright I guess that’s the end of my trip to Chile. I got back safe and sound though I did experience my first ever earthquake there!

So on my second day, there was a huge 8.2 earthquake in the north of Chile. I didn’t even know it happened until I went on Facebook and people were asking me if I was ok. So Chile is a super long country and the quake actually happened 2000km away from Santiago, where I was.

But on the 4th day, while I was going to fall asleep, I felt the aftershock of the quake! I was honestly super psyched! The photo frames rattled, the window vibrated, the bed shook, and my heart was beating so hard in excitement hahaha!

The first thing I did was of course to post this on Facebook and then went to sleep. Woke up to find that my family and friends were so worried after seeing my status and couldn’t contact me cos I was asleep hahaha. Some more I had a pretty nice dream and was oblivious to all this drama to make sure I was okay. 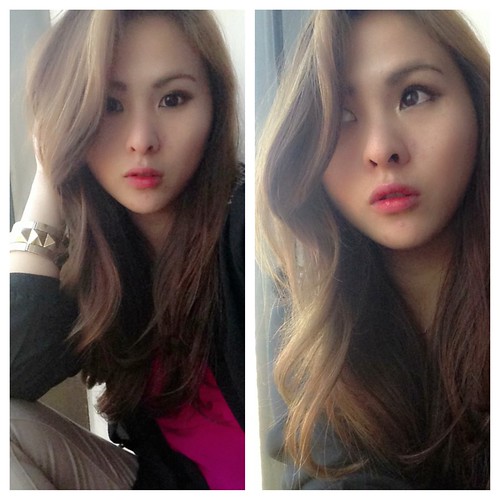 OH this is the best best part of the trip. Guess what?? I didn’t wash my hair at all the entire time I was there. Let’s see…around 8 days? HAHAHAH I’m so gross, somemore so proud of it! But it’s not humid at all there and check out how voluminous my hair was!